We’re more than a little excited to announce our first major update of 2018: Settle Up!

Next stop, Skyscanner, where you find some decent flight prices and – like the self-sacrificing saint you are – offer to book for everyone so you don’t miss them.

A few days later, you call in your debts on the group chat, feeling a bit awkward about the whole thing but, well, you know…rent. Flicking between a banking app and WhatsApp, you paste in your account number and sort code, press send and wait jubilantly for your balance to flourish and prosper.

A few days later, there’s no sign of life, so you chase up. ‘Oh meant to say, there’s a number missing in your account number’, ‘Sorreeee, didn’t have a card reader at home, will do it tonight’, ‘How much was it again?’. Rinse and repeat, ad infinitum.

It doesn’t have to be this hard. In a time of such vast technological bounty, the payback process shouldn’t be this convoluted, awkward and exhaustingly administrative – in fact, we felt so strongly about it that we decided to build a feature to replace it entirely!

The result is Settle Up – a brand new feature we’ve built to make those IOUs between family and friends a simple, streamlined and altogether more speedy affair. We’re on a mission to change the way people pay each other back; no sort code swapping, no awkward chasing texts, no double checking details – just a few taps, a single link, and you’re settled up.

So what’s new in the app?

Jump into the Pay section of the Starling app and you’ll find we’ve rearranged things a little. You’ll now notice a button that says ‘Settle Up’; tap it for the first time and you’ll be prompted to set up your very own Settle Up page. As you’d expect, it’s super quick and like all our features, puts you fully in control of your finances (which means that this page won’t be public until you give us the go ahead). 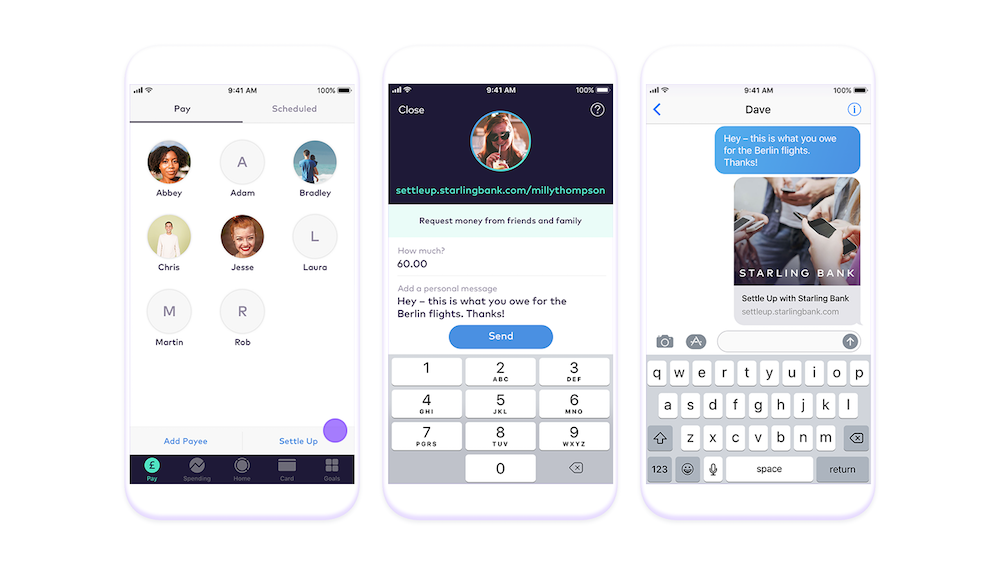 Whenever you want to request money, that unique, personal link is all you’ll need. If a friend owes you, tap in the app to send them your link and, if they’re a Starling customer, they’ll be able to pay directly into your Starling account in a couple of taps from the app. And if they’re not yet using Starling? They’ll be taken to a dedicated page on our website to pay using any UK debit card.

Other services use a similar approach to requesting and receiving funds, but we’re building this directly into Starling, because most of the time, we know you’ll want the money to go straight into your bank account rather than onto a prepaid card or another intermediary.

As part of your Settle Up service, you’ll have a main Settle Up page, which will be at settleup.starlingbank.com/yourname. Once that’s live, it’ll be available for anyone to visit at any time should someone need to send you a little cash.

But – as usual – we wanted to take things a little further, to make sure that this feature is as useful as possible to you. So we’ve also built in the ability to customise your page accordingly for a one-time use, for example, for when you want to request a specific amount from someone. 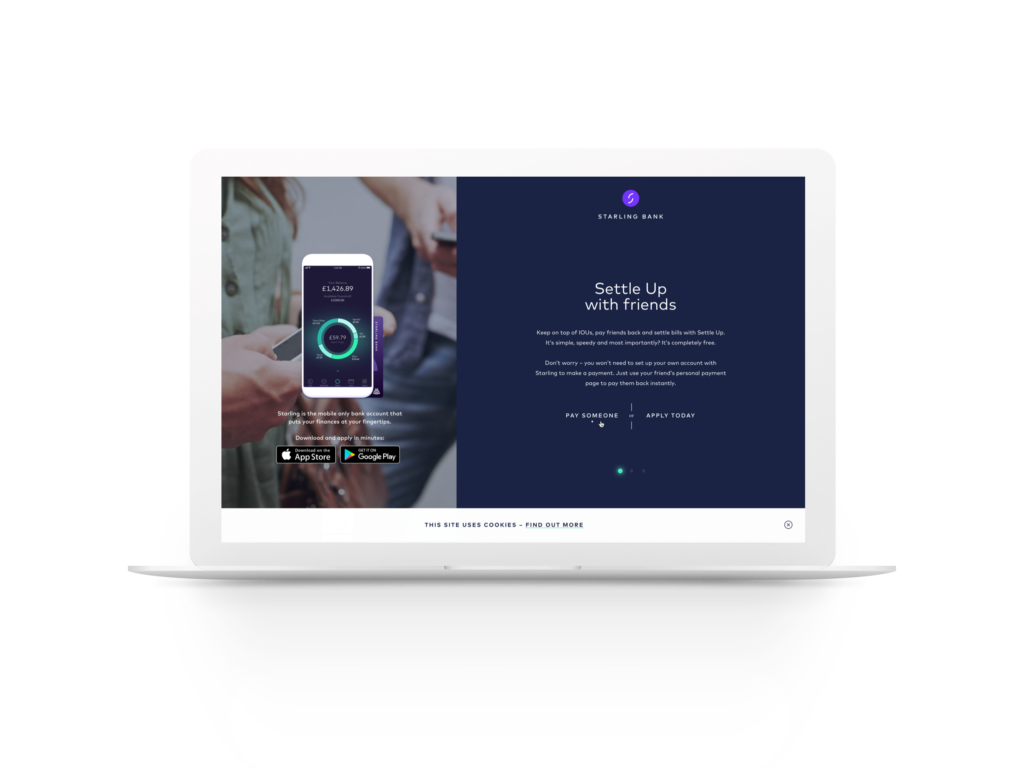 Enter the sum you’re after, add a personal note and share that unique link however best suits you. The recipient will then just have to follow the link, where they’ll find the customised page you created just for that particular IOU.

How can I start to Settle Up with Starling?

Already got a Starling account? Head to Pay and select Settle Up to activate your personal Settle Up link.

If you’re not yet using Starling, but you’re intrigued, create your own account in under five minutes by downloading the Starling app and applying for an account. Once you’ve been approved, you’ll receive your own personal Settle Up link, which you can send to friends so they can pay you back instantly with just a couple of clicks.

Are there any limits that apply when paying someone using the Settle Up website?

Some limits do apply. If you’re a fully verified customer, you can receive up to £250 per day into your account via a UK Debit card payment, which can be from a friend paying you back via your Settle Up web page, or by adding money to your own account using a debit card in app. The minimum amount you can request and pay with Settle Up is £1.

Got more questions? Check our help centre – or get in touch with our customer service team, who are available to chat 24/7.

Starling is a mobile current account built to help you enjoy a better relationship with your money. Manage your finances directly from your phone – no queues, no branches, no hassle. It’s fast, free and connected; get an account in minutes by downloading it today.

Our new debit cards: A greener way to pay

As part of our mission to protect the planet, from this month, every new Starling customer will receive a debit card incorporating recycled plastic.

The Starling Marketplace welcomes SumUp, a card reader that accepts debit, credit and contactless payments, and remote payments too.

iZettle enables small businesses to accept payments and process transactions in seconds. You can now connect through the Starling Marketplace.

Our new debit cards: A greener way to pay

As part of our mission to protect the planet, from this month, every new Starling customer will receive a debit card incorporating recycled plastic.

The Starling Marketplace welcomes SumUp, a card reader that accepts debit, credit and contactless payments, and remote payments too.

iZettle enables small businesses to accept payments and process transactions in seconds. You can now connect through the Starling Marketplace.

Saving for the future