Starling began as a single seed: an idea that banking could be better – and that it could all be done from one app. After two years, we received the funding that would allow Starling to grow, and exactly a year ago today we moved above ground and launched in the App Store. Day by day, month by month, we’ve continued to bloom, evolving into something solid and ever-growing, rooted in the technology we built from scratch. In celebration of our first year in the App store, we’d like to share some of our proudest moments so far, all of which have been made possible by the wonderful people who work here, and of course, the ever-present support we receive from our customers and community.

Advice from a tree:
Stand tall and proud
Go out on a limb
Remember your roots
Enjoy the view

Our first release of the Starling App gave you the power to see your balance in real-time, receive notifications to keep you in the loop about your spending, lock your card in app if lost or stolen, and the ability to make in-app payments. 365 days later, 33 Android updates and 30 iOS updates have seen features branch out to include Spending Insights, Goals, Settle Up and a packed Digital Wallet – for both personal and business accounts.

Customers can now connect to Apple Pay, Google Pay, Samsung Pay and FitBit Pay. In September, we launched both Starling Payment Services, and our Marketplace. Our latest additions include WealthSimple and Habito, financial services that fit seamlessly into your Starling account. Most recently, we released International Payments, which allows customers to make payments to over 37 countries in 19 currencies. And that’s just the start. 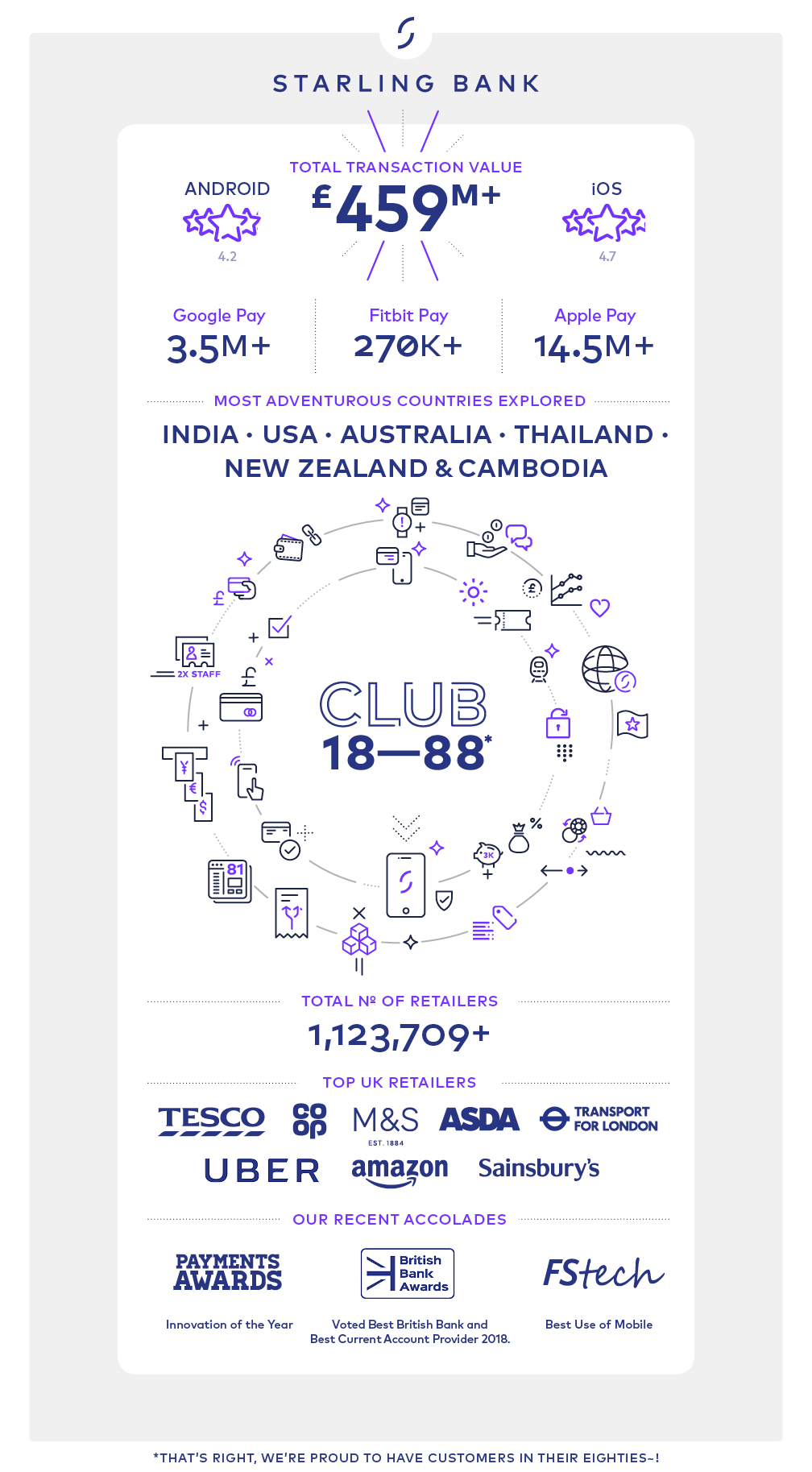 Our team is made up of people from all backgrounds and experiences and our customer base spans the generations. We have 18-year-old customers all the way up to age 88.

In our first month, we signed the Women in Finance Charter, marking our commitment to 30% senior management to be female by 2021 and voicing our support for equality within the industry. This March, we launched our #MakeMoneyEqual campaign. Our linguistic study of 300 articles found that the language used in the media is definitively splitting men and women into spenders and earners, savers and splurgers. Making money equal means speaking to men and women about money in the same way – but in the wider sense, it’s also about recognising the root causes of issues like the gender pay gap and taking steps internally to address them – as our founder Anne recently explored.

We are incredibly proud of the people who work at Starling. In the last year, Megan Caywood has been listed on Forbes 30 under 30; Mariam Ogunbambi has become a TechWomen50 Winner at WeAreTechWomen; and our founder and CEO Anne Boden has received an Industry Achievement Award at The Card and Payment Awards.

As a company, we have been awarded B2B Payments Innovation of the Year at the Payment Awards and Best Use of Mobile at the FSTech Awards. The results from Smart Money People’s 2018 British Bank Awards became the highlight of our year: Starling Bank was voted Best Current Account and Best British Bank.

None of this would have been achieved without the people who grow and develop Starling week by week (and the 3,708 bacon butties which have fuelled our Fridays). On 9th May 2017, there were 89 people in our team. Today, there are 174 of us, and counting.

It’s taken a team of remarkable people, thousands of hours, and almost three million lines of code to make Starling what it is today; a better kind of bank that’s giving people the tools to manage their money in a whole new way.

We’re committed to being an inclusive workplace. That’s why in 2017 we signed the Women in Finance Charter. Follow our progress here.

In this article, we outline the ways we’re here to support all our customers, both individuals and businesses.

Breaking barriers and breaking even

Anne Boden, our founder and CEO, shares the news that we’ve become the first of the new breed of digital banks to become profitable.

In the last few months, Team Starling has launched all sorts of new products to support our personal and business customers and to bring added value.