We’ve worked with researchers at Brunel University who have analysed over 600 photographs used for articles about money and finance, We found that men and women were depicted very differently. Men were shown as being in control and making financial decisions, whilst women were shown clutching piggy banks and counting pennies. We’ve teamed up with Lensi Photography to create a new library of 100 photographs that better represents women and money. They’re free to download.

When we started our #MakeMoneyEqual campaign in 2018 our aim was to remove negative gender stereotypes from public conversation around money and personal finances. So we commissioned a linguistics study from semiotics and cultural value agency The Answer, which assessed 300 articles from a mix of outlets aimed at men and women. Using discourse analysis, they found that the media split women and men by language when discussing money. 65% of articles defined women as excessive spenders and 70% of articles aimed at men defined making money as a masculine ideal.

From our assessment of 300 articles from a mix of outlets aimed at men and women, we found out that:

Our Manifesto to Make Money Equal

A booklet about Making Money Equal

We decided to pair up with writer and comedian Anne T. Donahue in 2020 to create a booklet that highlights the gender gap in the way men and women are spoken to about money.

With some wonderful illustrations from Erin Aniker, here is the Make Money Equal booklet.

Discover our Make Pocket Money Equal campaign on the ‘gender play gap’ that exists for kids.

Let’s talk about money in the same way to everyone. 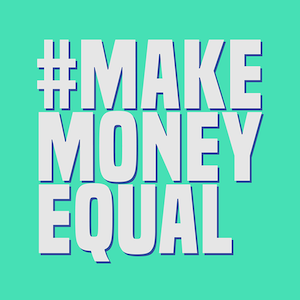 Apply for a Starling bank account today and enjoy app-based banking at its best.