To help you better understand how we make technology work for both our customers and our partners, our Social Media Manager Logan Allan provides a detailed explanation of how card payments work.

You may have noticed that one of the main differences between a Starling Bank account and one held at a traditional bank is that we display and notify you of your transactions in real-time. This means that your balance is updated instantly rather than days later.

With Starling, as soon as you authorise a payment, the amount is deducted from your available balance and a spending notification appears; sometimes even before it’s approved at the card machine! We feel this provides you with the added visibility and control that makes managing your money easier. Knowing how much you’ve spent and how much you’ve got left can be an important insight that builds confidence when managing your finances - no more nasty surprises on Monday morning.

When you do your weekly shop or pay for those new trainers, a lot goes on behind the scenes. In fact, the amount of information transferred in the matter of a few seconds is pretty incredible.

Let’s dive into the wonderful world of card transactions.

First, we have the ‘authorisation’:

Next up, the ‘presentment’:

Let’s shake things up and add in ‘offline transactions’

‘Offline transactions’ are a bit different. These are transactions that don’t get processed immediately and don’t display in your app at the time of the actual transaction. Merchants may process transactions ‘offline’ for a number of reasons, but the most common would be because there is no immediate connection to the transaction network. The best example of an offline transaction would be using your card on the train to Newcastle to buy that overpriced bottle of water or buying a stale sandwich whilst mid-flight to Prague.

And on the topic of Prague, let’s turn our attention outside the UK. Imagine you’re on holiday, skiing down the slopes of Whistler or tanning on the beaches of Honolulu. This is where your Starling card brings out the big guns - allowing you to use your card abroad without those hidden fees and getting a great exchange rate, what more could you want?

We’re going to use an example for this one, so buckle up!

You buy a jacket that costs $100. Following the steps outlined above, the merchant authorises $100 to be taken from your account and we issue you the notification. Bear in mind, your account is in pounds so an estimated amount is set aside as a pending transaction based on the Mastercard exchange rate that is currently in play. This estimated amount is $100 converted to pounds at the time of the authorisation but it does not represent the final amount because the exchange rate is forever fluctuating.

A few days later, the merchant claims their funds by issuing a presentment. They present for an amount of $100 and $100 is once again converted to pounds, which is then finally taken from your account. Depending on the fluctuation of the exchange rate between the authorisation and the presentment, you will either be charged slightly more or slightly less for that $100 jacket. The merchant is still owed $100 and that is why they claim $100 - they do not take the exchange rate into account when issuing the presentment as they work in the local currency and not pounds. You’ll notice this in the app as the amount that was displayed when the authorisation was placed will most likely be a little different when compared to the final presented amount. This will affect your balance; the transaction in your feed will be updated to represent the presented amount.

Now that we’ve covered the successful transactions, what happens when a transaction fails but you can still see it in your app? In this case, Starling would have received an explicit instruction from the merchant to authorise the amount on your card, however it’s possible that something went wrong either on the merchant’s side or with their acquirer, the merchant’s bank. This could lead to them not being able to confirm that the transaction was successful, causing the payment to fail on their side. 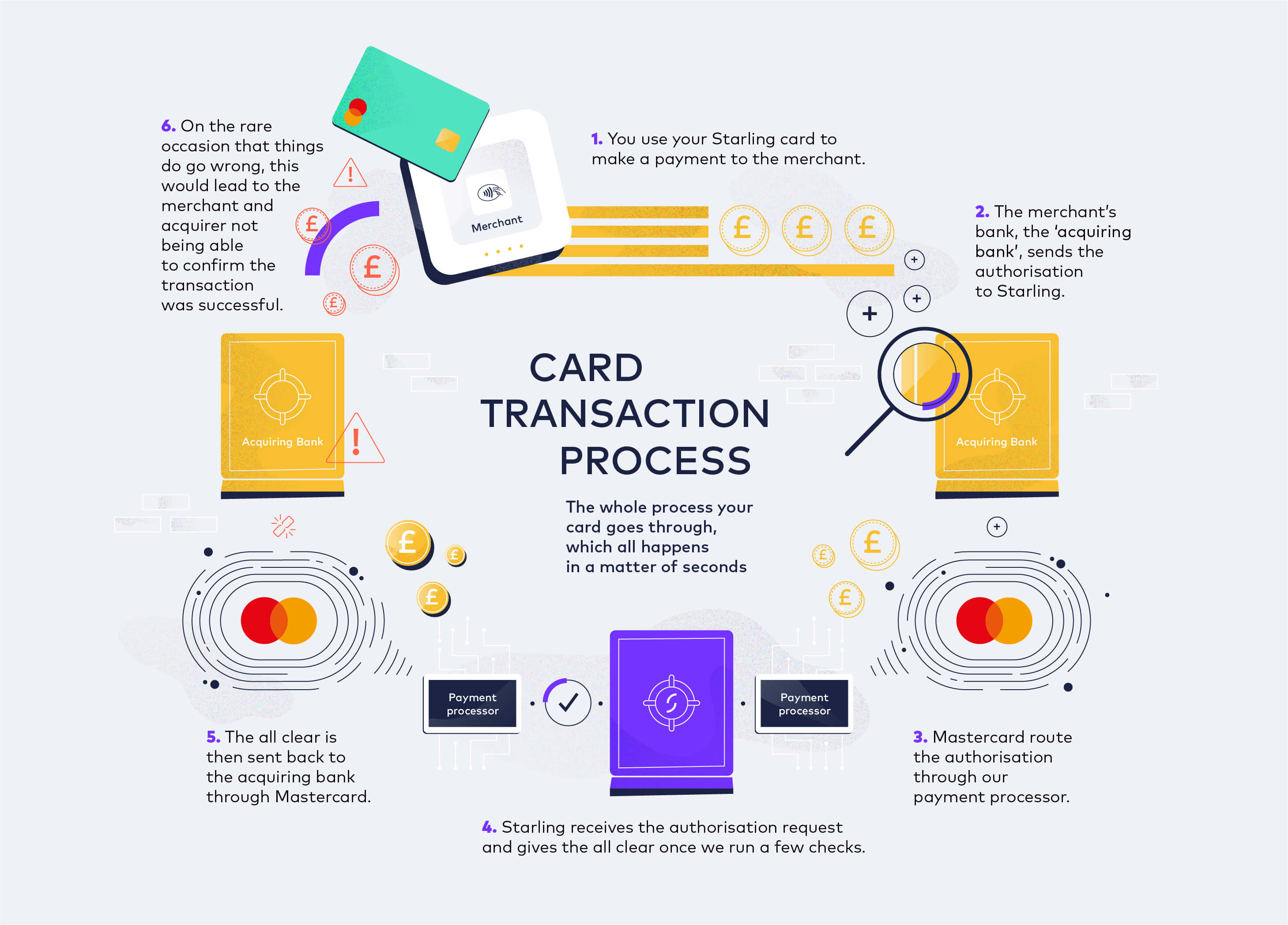 The above could happen when a website has a timeout, you briefly lose connection or if the card terminal is experiencing difficulty at the time. So what happens to the funds, seeing as they’ve been allocated to the merchant even though the transaction had failed? We’re glad you asked, because this is where the ‘authorisation reversal’ comes into play: Card transactions can be reversed before the settling of funds or before the presentment arrives in two ways:

On the rare occasion that a failed transaction does occur, we can remove the allocation and return the funds to your effective balance sooner than the seven calendar day window. We would require some evidence that the transaction had failed though and this could be one of the following:

These can be sent via email to our Customer Service team.

So, with the wonderful world of card transactions explained, it’s time for us to tap our red shoes together three times and return home. As always, if you ever have any questions, we’re here for you 24/7/365!

The Starling Developer Podcast is back with Series 4

The Starling podcast is back, with series 4. Jason Maude, our chief technology advocate, present 6 episodes on technology at Starling over the past year and what we’re working on now.

What happens when Google bakes a new Android treat

Seven months after Google rolled out its Android Pie mobile operating system, Kai Ma, an Android engineer at Starling, looks ahead to the next version - Android Q.

The odd case of the iPad app

Engineer Kristian Angyal, who works on UX and iOS development at Starling, explains how and why we’ve changed the way our app runs on iPads.

Part 4: Our team of techies

From design to development, anthropology to maths, our team at Starling have all sorts of backgrounds. We share their career advice in our blog.

Part 3: Our team of techies

This week, in the latest of our series about Starling’s diverse team of developers, we hear from coders with backgrounds in music and art history.

Part 2: Our team of techies

We’re a team of driven, passionate people who come from all corners of the globe. This week, we asked some of our developers to share their story.